These are the best board games of 2013. You remember that year, Prince Charles is born, “Blurred Lines” is everywhere and not yet tainted by theft or scandal, the beloved show 30 Rock ended, the Red Wedding took place, Sharknado hit the small screen, Toronto Mayor Rob Ford admits to crack addiction, the Harlem Shake is the big internet trend and Beyonce graces the Superbowl with her presence. The world is vibrant and so is the tabletop gaming industry. Below please find the best board games of 2013.

Attention Publishers: If your game appears on this list, you may use the award seal to the left in connection with your marketing and publishing of that game however you see fit. Please link back to this article as the source.

Just making the list of the best board games of 2013 is Amerigo. In Amerigo, the players help Amerigo Vespucci on his journey to discover new land. The players explore the islands of South America, secure trading routes, and build settlements. The actions available to players are determined through the use of a specialized cube tower. At the start of the game, this tower is seeded with action cubes, which come in seven colors, with each color matching a particular type of action. This Renaissance strategy game is for 2 – 4 players and will run about 90 minutes.

FOR MORE: Buy Amerigo on Amazon

Another game just making the list of the best board games of 2013 is based on a cult favorite. In Firefly: The Game players captain their own Firefly-class transport ship, traveling the ‘Verse with a handpicked crew of fighters, mechanics and other travelers. As a captain desperate for work, players are compelled to take on any job — so long as it pays. Double-dealing employers, heavy-handed Alliance patrols, and marauding Reavers are all in a day’s work for a ship’s captain at the edge of the ‘Verse. A thematic game for 1 – 4 that should take about 2 – 4 hours.

FOR MORE: Buy Firefly The Game on Amazon

In 1775: Rebellion, players take the roles of the American Continental Army and Patriots against the British Army and the Loyalists. Each side tries to control the colonies, provinces and territories. The four factions each use their own deck of cards to move their units into positions. Battles are resolved quickly with custom dice. A war strategy game for 2 – 4 players that will take about 1 – 2 hours. This entry on the list of the best board games of 2013 is for any fan of Risk or Axis & Allies.

Bruxelles 1893 is a worker placement game with elements of bidding and majority control. Each player is an architect of the late 19th century and is trying to achieve, through various actions, an architectural work in the Art Nouveau style. The most successful building yields the most points. Each player can also create works of art to increase his score. A 2 – 5 player game that will go for about 50 – 125 minutes. This later title on the list of the best board games of 2013 has plenty of style.

FOR MORE: Buy Bruxelles 1893 on Amazon

As new villains appear to lay claim to the world of Indines, new heroes rise to challenge them. BattleCON: Devastation of Indines puts you in control of 30 mighty heroes and deadly villains to decide the fate of the world. A dueling card game designed for head-to-head and team play. Each player selects a character who uses a unique gameplay mechanism to give them an edge in combat. A 1 – 5 player gaming lasting about 45 minutes. This entry on the list of the best board games of 2013 is a great all-out battle option.

Glass Road is a game that commemorates the 700-year-old tradition of glass-making in the Bavarian Forest. This best board games of 2013 game gives some great education on the matter, as well as, fun. You must skillfully manage your glass and brick production in order to build the right structures that help you to keep your business flowing. Cut the forest to keep the fires burning in the ovens, and spread and remove ponds, pits and groves to supply yourself with the items you need. A 1 – 4 player game running about 20 – 80 minutes.

Welcome to the most famed Geisha street in the old capital, Hanamikoji. Geishas are elegant and graceful women who are skilled in art, music, dance, and a variety of ceremonies. Greatly respected and adored, Geishas are masters of entertainment. In Hanamikoji, two players compete to earn the favor of seven illustrious Geishas by collecting each Geisha’s preferred performance item. A 2 player game running a quick 15 minutes each. This title at the back turn of the best board games of 2013 is a dice tower essentials title.

FOR MORE: Buy Hanamikoji on Amazon

In Bruges, players assume the role of merchants who must maintain their relationships with those in power in the city while competing against one another for influence, power, and status. Dramatic events cast their shadows over the city, with players needing to worry about threats to their prosperity from more than just their opponents. A strategy game for 2 – 4 players that will last for about 60 minutes a pop.

FOR MORE: Buy Bruges on Amazon

Rococo is a Eurostyle board game with an interesting take on deck-building. Each turn you play one of your employee cards and let that employee perform a task: hire a new employee, buy resources, manufacture a coat or dress, or invest in the ball’s decorations. But not every employee is up to every task, so you must choose and lead your employees wisely. A game for 2 – 5 players that will take around 1 – 2 hours.

FOR MORE: Buy Rococo on Amazon

In the super-fast sushi card game Sushi Go!, you are eating at a sushi restaurant and trying to grab the best combination of sushi dishes as they whiz by. Score points for collecting the most sushi rolls or making a full set of sashimi. Dip your favorite nigiri in wasabi to triple its value! The card drafting strategy game is for 2 – 5 and fit for the whole family. Games occur over a quick 20 minutes. A better version of this best board games of 2013 will come out later, but that doesn’t mean that Sushi Go! wasn’t deeply ahead of its time,

In dead center of the list of the best board games of 2013 is Battlelore. Prepare for fantasy battles beyond your wildest imagination with the onslaught of BattleLore Second Edition. Set in the fantasy realm of Terrinoth, BattleLore Second Edition is a two-player board game focused on squad-based battles between the hardy defenses of the Daqan Lords garrison in Nordgard Castle and the unleashed ferocity of the demon-worshipping Uthuk Y’llan. Games last 45 – 90 minutes.

FOR MORE: Buy Battlelore on Amazon

In Bora Bora, players use dice to perform a variety of actions using careful insight and tactical planning. An easy choice for the list of the best board games of 2013. The heart of the game is its action resolution system in which 5-7 actions are available each round, the exact number depending on the number of players. Each player rolls three dice at the start of the round, then they take turns placing one die at a time on one action. A strategy game for 2 – 4 players lasting about 1 – 2 hours.

In Lewis & Clark, each player manages an expedition intended to cross the North American continent. Their goal is to be the first to reach the Pacific. Each one has his own Corps of Discovery that will be completed by the Native Americans and the trappers met during the journey. He has to cleverly manage his characters and also the resources he finds along the way. A racing strategy game for 1 – 5 players expected to last about 2 hours per game. The original explorers would be proud of this best board games of 2013 entry.

In Viticulture, the players find themselves in the roles of people in rustic, pre-modern Tuscany who have inherited meager vineyards. They have a few plots of land, an old crushpad, a tiny cellar, and three workers. They each have a dream of being the first to call their winery a true success. This hand management strategy game is for 2 – 6 players and lasts about 90 minutes a game. If you are a fan of wine, this title on the list of the best board games of 2013 is for you.

Nations is an intense historical board game where players control the fate of nations from their humble start in prehistoric times until the beginning of World War I. The nations constantly compete against each other and must balance immediate needs, long-term growth, threats, and opportunities. A card drafting civilization game for 1–5 players that takes about 40 minutes per player to play.

FOR MORE: Buy Nations on Amazon

In Russian Railroads, players compete in an exciting race to build the largest and most advanced railway network. A slam dunk for best board games of 2013. Players appoint their workers to various important tasks. The development of simple tracks will quickly bring the players to important places, while the modernization of their railway network will improve the efficiency of their machinery. This worker placement strategy game is for 2 – 4 players and will last approximately 1.5 – 2 hours.

In Forbidden Desert, players take on the roles of brave adventurers who must throw caution to the wind and survive both blistering heat and sand in order to recover a legendary flying machine buried under an ancient desert city. A fresh game based around an innovative set of mechanisms such as an ever-shifting board, individual resource management, and a unique method for locating the flying machine parts. An adventure game for 2 – 5 players lasting about 45 minutes. This is the highest-ranking pure cooperative game on the list of the best board games of 2013 and a good one at that.

Taking the bronze on the list of the best board games of 2013 is Eldritch Horror. Eldritch Horror is a cooperative game of terror and adventure in which 1 – 8 players take the roles of globetrotting investigators working to solve mysteries, gather clues, and protect the world from an Ancient One. Each comes with its own unique decks of Mystery and Research cards, which draw you deeper into the lore surrounding each loathsome creature. Games run for 2 – 4 hours.

Caverna: The Cave Farmers is a worker-placement game at heart, with a focus on farming. In the game, you are the bearded leader of a small dwarf family that lives in a cave in the mountains. You begin the game with a farmer and his spouse, and each member of the farming family represents an action that the player can take each turn. Together, you cultivate the forest in front of your cave and dig deeper into the mountain. For 1 – 7 players that will run about 30 – 210 minutes.

The top spot on the list of the best board games of 2013 goes to Concordia. Instead of looking to the luck of dice or cards, players must rely on their strategic abilities. Be sure to watch your rivals to determine which goals they are pursuing and where you can outpace them! In the game, colonists are sent out from Rome to settle down in cities that produce resources. Each player starts with an identical set of playing cards and builds using the deck-building mechanism. A peaceful strategy game of economic development in Roman times for 2-5 players that will last about 100 minutes a game.

FOR MORE: Games Like Concordia | Buy Concordia on Amazon

Do you agree with this list of the Best Board Games of 2013? Leave your thoughts in the comments below. 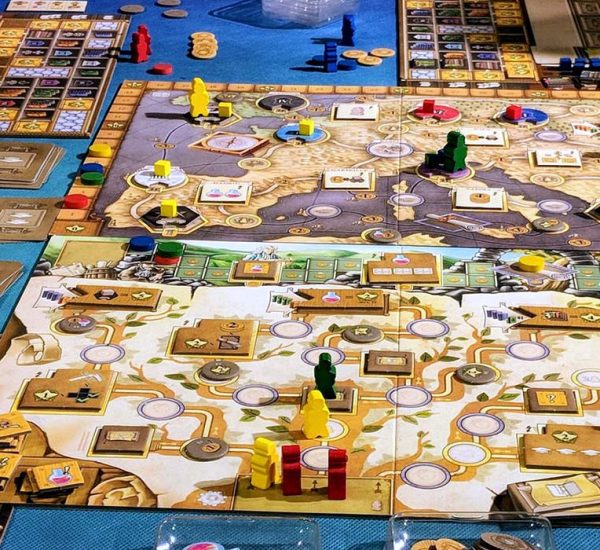 Ares will Publish Ensemble in English

Hasbro is Planning a Slew of Board Game Reality Shows

Risk TV Show In Development With House Of Cards Creator

Medici Expansion Announcement Auction Companion That Is For New Era