Codename Pictures is a simple party game that relies on your descriptive ability to pass one-word clues to your teammates to uncover a grouping of spies without alerting opponents to the locations of their spies. It is one of the hottest party board game in existence and deserves the high marks it received in this review. It is the perfect thing for a big group, lightweight enough to not have to take too serious but complex enough to really get the conversation and laughs going. This is the Codenames Pictures review.

Codenames Pictures is easily the hottest party game out there. It is baffling how quickly this game will make people gitty with joy. It is a very simple game that steps on each other in all the right ways. The simple task of having to talk about a variable amount of clues with one word without giving away your opponents is both tough and rewarding for all sides. Then once one clue is gone, it changes everything for both sides in what you can say, keeping it fresh. A very fun game.

Every game has 20 brand new cards that each have their own picture for you to interpret. There are 240 images which means you could have 12 straight games and never use the same cards. More than that, how cards pair with each other and where your spies are versus your opponents’ matters. You could use the exact same cards but how you need to group them and avoid the double agent changes ever time. So we established the options for different games are plentiful, but what really gets this high marks is that games are quick and you want to keep going.

The entire game is player interaction, and it is on so many different levels. You are interacting with your teammates but you are also interacting with your opponents on every move. Everything everyone says has to play off of everyone in the game. By that, I mean that you have to be in sync with your teammates, but also simultaneously push away your opponents and with only one word. As far as player interaction goes, you do not get much more than Codenames.

The game is simple to learn but hard to master and that is a marque quality of good quality. It has so many levels and possible outcomes. It is no wonder it has spawned so many sequels, the rules and objectives have been masterfully crafted. Besides that, the pieces are well made and incredibly well thought out. It is easy to give this one high marks across all codenames pictures review categories.

The theme is fun cartoonish spy. The backstory is delightful and accessible for all players of ages. You are a spy and you need to make contact with your operatives in the field without running into your opponents’ spies. It is simple and non-threatening but exciting and suspenseful. The theme is consistent throughout and another high mark on the codenames pictures review. 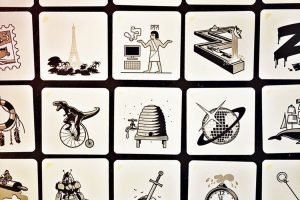 When you think party games, games that might come to mind are Pictionary, Taboo or Cards Against Humanity. These are games that give a group the tools to have fun with one another. Codenames is another one of those games and deserves to be on the top of those lists. Huge recommend. We hope this Codenames Pictures review has been helpful.

CODENAMES PICTURES REVIEW by OTHER REVIEWERS

5 / 5 – The Board Game Family Review
“The biggest reason it scores so high, is simply because it’s a blast to play! The first time we played Codenames: Pictures we played 6 games straight!”

5 / 6 – Tabletop Together Review
“Codenames: Pictures is without a doubt a party game, and a very good one at that. Personally I’m not a big fan of party games, but this one is one of the few ones I do own and that I actually enjoy playing. I would actually go as far as to say that this is the ultimate party game.”

82 / 100 – Zatu Games Review
“The game itself is a simple, easy to understand concept which is accessible to a wide age range. Although it plays quickly, it still gives an element of tension that will keep you engaged and focused.”

5 / 6 – Play Board Games Review
“Codenames Pictures is a nice way to challenge your brain in a different way than the original. Some people find it easier while others think it is harder. It might have to do with how you think.”

Positive – Geek Dad Review
“I think the pictures make the game better and they force you to think more and be more creative. When I play Codenames now, it almost feels a bit easier—but still very enjoyable. Codenames: Pictures, though played quite similarly to its predecessor, is its own game—and a very enjoyable one at that.”

Positive – Geeks Under Grace Review
“If you haven’t played Codenames yet, I recommend you pick up the original first. Even though Codenames Pictures is a little easier and quicker to play, there’s just something about the wordplay in Codenames.”

What would you put in your Codenames Pictures Review? Let us know in the comments below or on our BGH Facebook Page.