Space is getting tight in Small World, there are just too many races living off the land. In this light-hearted and zany civilization game, it is your goal to take over as much territory as possible while balancing how many races you want to head into the fight with. The game is very much about strategic combat and while simple to learn, has many facets to master. This is our Small World Review.

There is no shortage of options and the balance of holding strong but at the same time expanding your empire makes for a very fun experience. Just the simple mechanic of randomly mixing creatures and special abilities can make races play dramatically different. It is also nice to not have random elements like dice screwing up your gameplay if it is not your lucky night. It is just edge of your seat strategy. As we will tell you over and over in this Small World review, this is a good one.

Small World was nice enough to provide a completely different map board depending on how many players participate which should show you their passion for having a balanced board. Though the core board is the same, the mix of races, special abilities and map invasion entrance points, makes for a completely new game every time. The fun is in the combat strategy and with the way the game is set up, it is never the same two games in a row.

The highest marks in this Small World review go to player interaction. It is a conquest civilization game so it is all about player interaction. For the most part, you can be off building your empire, but the world is in fact too small and you will need to bump heads with your opponents. It is not just about the aggressions though, a good balance is the most important thing. If you go too hard against another player, you will trade units in a senseless war and never win. You have to make friends and make the right moves.

Balance can be a huge problem or a huge benefit and in Small World, it is the latter. There are so many different races and powers that have to work together, yet there is no one thing in particular that is too powerful. This machine is well oiled and has set the stage for the amazing expansions to come. One thing about Small World is that it is heavy. There are so many components and they are all of a high caliber. This game from conception to production is well done. As far as this Small World review is concerned, the designers have created a game that will last the test of time.

It is fitting that Small is in the title because some talented artists had to make tokens for all sorts of races that were special. Races that even though would be on a small tile, but have a presence, uniqueness and attitude. Even the board itself has many little flourishes that add to the game. There is nothing over the top fantastic here, but it is well put together for what it is. 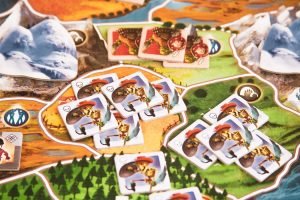 Small World is kind of Risk meets Carcassonne. The combat and expansion is important, but the strategic resource control is everything. This game is a leader in the category of combat meets civilization, it tops everyone's lists and for good reason. We recommend this game highly if you are looking for this mix of gameplay. This has been our Small World review.

SMALL WORLD REVIEW by OTHER REVIEWERS

8.5 / 10 – iSlayTheDragon Review
“It’s not very newbie friendly, but it’s also not rocket science; it looks much more intimidating than it is, and the fantasy in the game is not like something from Fantasy Flight: your wife won’t feel like she needs to shower to get rid of the geek vibes once the game is over. “

5 / 5 – The Board Game Family Review
“Because of the fun intensity and length of the game, once a game ends, we’re satisfied to take a deep breath and just soak in the enjoyment we had.”

75 / 100 – Zatu Games Review
“Small World will make a great addition to any gaming shelf. It’s fun, beautiful and simple so it’s great if you don’t have hours and hours free, and is great for new and younger gamers.”

4 / 5 – There Will Be Games Review
“I like Small World a lot, even though to be honest I miss some of the rules from Vinci. In an attempt to make a nice, family-friendly conflict game that appeals to a larger market.”

Positive – Board Game Resource Review
“I like Small World a lot, even though to be honest I miss some of the rules from Vinci. In an attempt to make a nice, family-friendly conflict game that appeals to a larger market.”

What would you put in your Small World Review? Let us know in the comments below or on our BGH Facebook Page.