Terraforming Mars is an intense engine-building game. Players are each random corporations fighting with one another to make the most money and resources out of Mars. Everyone works together to raise win conditions and get victory points along the way. Besides points, the key is to build up the machine that is your resource production. This is our Terraforming Mars review.

If you like this type of game, Engine-Building Games, then oh boy this one is for you. You are in charge of one of the biggest engines imaginable, a corporation trying to make money off the planet of mars. There are not as big or as well oiled of an engine as Terraforming Mars. The gameplay options are endless, no matter what happens, it is new and exciting. And while you have room to do your own thing, you are constantly bumping up against others, making for a great mix of fun. This review of Terraforming Mars gives out top marks everywhere, and fun is definitely one of those categories.

There is a lot to this one and that makes for many games worth of stuff to explore. First off, there are so many action cards, which make up around 25 – 33% of the entire game. It comes with 200 and then there are more in expansions. Second, there are so many rule twists and variants. Another wrench is that you start as a random corporation that has different abilities and resources. You could play 10 games in a row and have a completely different experience each time. Another top-notch mark on the review of Terraforming Mars.

You are all working together to raise the water, oxygen and temperature levels. At the same time, you are fighting with each other about who can get the right bonus when. On top of that, you are fighting over the space on mars, the right city or forrest placement can crush another player. Finally, as you build up your machine, you are going to have to hurt others just a bit, the cost of doing business. Who you hurt when and who you keep happy matters.

As previously mentioned, this is one well-oiled machine. To have an engine this big to work, it really needs to be balanced. One-piece being off can tip the scales in someone’s favor dramatically. This is well put together and thoroughly thought out. Some game pieces could be better, game boards are flimsy and action cards start to wear after one shuffle, but that is overshadowed by the amazing quality and feel of the bronze, silver and gold unit tokens.

There really isn’t too much to it, Mars is a barren planet. They do receive points for the various resource symbols and clear differentiation of all the crazy things going on. Everything about this game is well thought out and the art and style is no different. Given that the lowest score for this review of Terraforming Mars is a 7, that should give you an indication of overall quality. 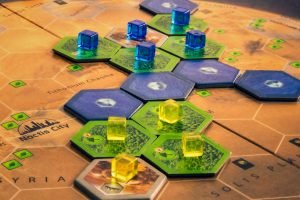 If you want an intense 2-ish hour engine-building battle royal, then this is absolutely the #1 game on your list. It is amazing, one of the greats, and a gold standard in its field. The game is super satisfying with 3 players, 5 players and even the very well put together solo version. We hope you have enjoyed our Terraforming Mars review.

TERRAFORMING MARS REVIEW by OTHER REVIEWERS

9 / 10 – iSlayTheDragon Review
“Terraforming Mars is much greater than the sum of its parts. While I dislike the level of player interaction, the downtime, and the depth-to-time ratio, Terraforming Mars is unquestionably a game I want to keep playing.”

4 / 5 – Meeple Like Us Review
“If I had only one single word to describe what it’s like to play Terraforming Mars it would be ‘Good God It’s Bloody Frustrating’. Frustration is by far the single most dominant emotion I associate with play.”

96 / 100 – Zatu Games Review
“Terraforming Mars is my favourite game of 2017 and one of my favourites ever; I would highly recommend it, that’s if you can get your hands on a copy of course!”

3.5 / 5 – Board Game Quest Review
“Solid fun, but requires variants to minimize luck and experience from players to be strategic. New players should ideally play with other new players to not feel left out.”

Positive – As A Board Gamer Review
“What can I say more. It’s a great game, one of the best games of the year. Exciting, quick and with tones of strategies to try out. Buy it I say.”

Positive – Meeple Mountain Review
“Terraforming Mars is fantastic. It’s rare to find a game with smooth mechanisms that ties an interesting theme tightly with gameplay. Holding a hand of cards and trying to determine an optimal way to play them is one of my favorite gameplay mechanisms, and Terraforming Mars handles this so well.”

What would you put in your Terraforming Mars Review? Let us know in the comments below or on our BGH Facebook Page.